In July 2022 we have been able to secure a small additional amount of the same coffee we offered in late 2021.  The coffee is triple bagged as described below and absolutely cupping as new. We are not aware of any coffee that has arrived more recently.  This is one of the top coffees coming out of Yemen and has been extremely popular in prior years. This year the bags arrived in 3 layers, an outside protective layer, the light canvas bag shown in the photo above and an inner Ecotact - all intended to protect the flavor of the rare coffee within. This is a very special, limited edition Haraaz Red Grade A+ from our source in Yemen.  We have offered this particular coffee in previous years and it really stands head and shoulders above other coffee from Yemen albeit at a considerably higher price. We attended a group cupping of Yemeni coffee some years ago with coffee from a number of exporters and from different regions in Yemen. There were a lot of folks at the cupping and essentially this coffee walked away as the consensus first choice with the real question being which would be the distant second choice. we work closely and frequently with the exporter and have early access to some of the top lots

While many grades and sizes are produced, this particular one is the very highest.  Haraaz Red is the result of painstaking care at every stage of the post harvesting process.  This coffee was produced from cherries that were brought to the Al Mashtal ul Barhani Drying Station by licensed area farmers. there, coffee is inspected, sorted and paid for the level of quality. There is full traceability in the process. This attention to detail produces a  distinct difference in flavor and clarity.  On the farm it begins by harvesting only fully ripe, mature coffee cherries, then separating the largest cherries and drying them in a specially designed pyramid to promote airflow while slowly drying.  This sorting and drying method produces unique ripe coffee flavors. Considering all of the turmoil in Yemen it is amazing that any coffee gets exported at all at the moment; to organize this effort is a particular achievement at this time.

We work directly with an exporter in Yemen who culls true specialty grade coffee and ships it to the US in Grainpro bags which isolate the coffee from any taste and odor and also controls moisture. Our direct relationship is important because often when one buys coffee from Yemen they may get a variety of growing years all mixed together, or, mixed screen sizes. This year we began to import a A+ grade of Haraaz coffee, a slightly larger bean size that is also more uniform. This allows more evenness and control during the roasting process, albeit more costly.

Our shipper works with growers and you can be assured of new crop, evenly graded specialty coffee, the real deal. It's expensive but farmers are assured of much higher remuneration than they would typically receive as well as investment in social programs. This is 100% authentic Yemen Mocha from a single, quality producing region.

Yemen Harazi coffee comes only from the Haraz Mountains, an ancient coffee growing region in the isolated northwest highlands. Coffee is grown at very high altitudes and beans have a particularly hard density. Altitude of the agricultural land in the region ranges from 4500 feet to an astounding 9000 feet. Flavor is intense and characteristic of the very best Mocha coffee Yemen has to offer. This Haraaz coffee is marked superior to other coffees from Yemen that we have recently cupped. 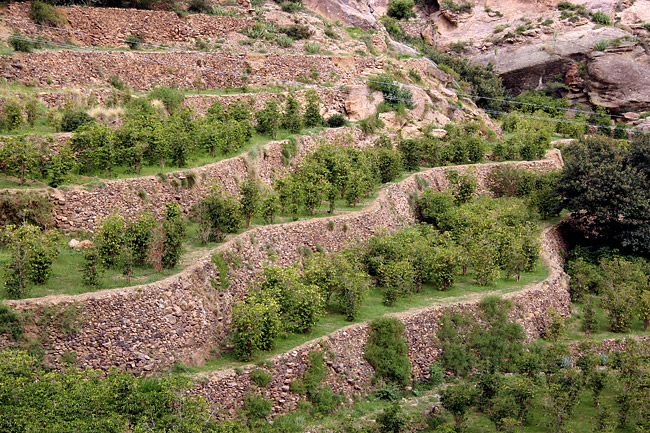 Coffee trees growing on steps carved into rock in Harazi

Coffee is produced in the Haraaz Mountains with ancient methods, resulting in natural, dry processed coffee. Steep, rocky terraces were carved in the rugged mountains centuries ago so it could be farmed. While not certified as such, Haraaz coffee uses no synthetic fertilizers nor pesticides, and all crops are rain fed. With almost no access to commercially available farming supplies, the coffee is grown in a natural environment, free of pollution. The growing methods have not changed for centuries.

Cherries, picked by hand are placed on straw mats and laid on village rooftops, to dry in the sun. The farmers take a lot of care to protect their coffee from contamination, mold and other negative conditions during the two week long drying period. Once dry, beans are collected by the exporter in all the villages throughout this mountainous region, and transported to a collection center in the village of Al-Hutaib. Finally, it is conveyed to processing facility in Sanani for milling, bagging and export to waiting international buyers.

Ancestral, heirloom varietals have been catalogued and include unfamiliar names such as Dawairi, Tufari and Udaini. Recently, two other varietals have been discovered, Shabriqi and Jadd'di. Some of these produce cherry year round while others produce on a yearly cycle. Still others yield cherry only every other year. Harvest is generally October and December, with other varietals harvesting in March and April.

In the last three decades of the twentieth century farmers turned away from traditional crops, including coffee, to grow Qat, a narcotic, and far more lucrative endeavor. Apart from the illegality and moral issues, Qat farming destroys the soil of its nutrients and area's scarce water supply. With the help and guidance of the 'Haraaz Project', as well as government incentives, many of the five hundred or so farmers in the Haraaz Mountains have turned their attention back to their traditional coffee roots.

Today, you will find Haraaz coffee to be one of the best. For Yemen Mocha fans, choose this coffee for a most pleasant surprise. This season's price for this particular coffee is several dollars higher per pound than last year. Growers have a direct monetary reward for the quality they deliver to the receiving station. Fortunately, the quality is excellent and, though expensive, represents the best coffee originating from Yemen. 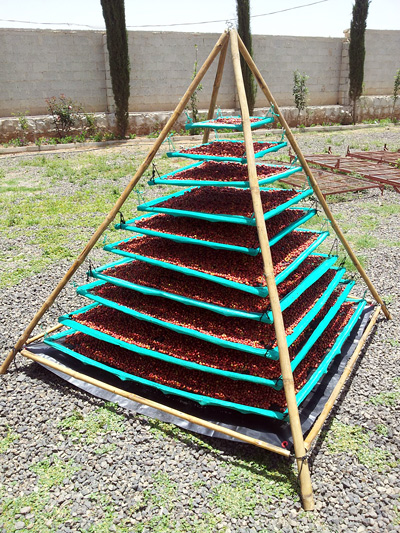 Cup Characteristics: Bold, striking, clean, exotic cupping. Lots of berries and citrus notes with dark chocolate resulting in a tongue coating mouthfeel. Racy, distinctly Yemeni Mocha flavor notes. No other coffee tastes quite like this one nor has its lingering mouthfeel.

Roasting Notes: Natural process coffees roast a bit quicker than washed. We like this coffee roasted to full city, preferring to pull the roast just as it begins second crack. However, taking it a little further into second crack will provide deeper tones, albeit at the expense of some floral notes. It's worth experimenting with the darkness of roast. If roasted more lightly some cinnamon notes are detectable. This A+ grade is entirely larger screen size beans and is the most uniform preparation you are likely to see coming out of Yemen.

Arabica Introduced: Around the 6th century from Ethiopia.

Yemen was the first county to cultivate coffee. The legendary Omar and Kaldi ascribed the power of Yemen coffee as life affirming. Mocha itself is shrouded in myth and has become synonymous with coffee. All Yemen coffees are naturals meaning the coffee is dried in its husk without fermentation, then milled. While not certified as organic, Yemen coffee is grown as it has been for hundreds of years, without man-made fertilizers, herbicides and pesticides. Yemen produces truly world class coffee.