About Rwanda Murundo Cup of Excellence #3

Arrived early December and we have secured more of same lot in June, winner of the #3 spot in the Rwanda Cup Of Excellence competition. The auction was held mid September 2018. We purchased the coffee at the auction and our lot was air freighted to the US. It arrived in vacuum packaging. Cup of Excellence cupping score was 90.03 placing this into the coveted Presidential Coffee league with a final score above 90.

The Murundo Coffee Washing Station was purchased in 2016 by Teuscher Invest Ltd., a Swiss company who produce, process and export coffee under the name Kivubelt Coffee. Kivubelt owns and operates several farms and another washing station besides Murundo, and originally rented the facility in 2014 after their first crop was ready to be processed. Realizing the facility was way larger than what was needed for their own crop, Kivubelt decided to buy cherries from the smallholder farms near the washing station to process too. What was supposed to be a temporary situation has turned into a long-term relationship, with more than 500 other farmers bringing their crop to be processed every year.

Staff at the Murundo Washing Station ensure consistency by visiting farms to teach producers to pick only the ripest cherries. Once at the washing station they are floated in a tank to further cull any unripe cherries. After that they are pulped and fermented over a period of 12 hours. The coffee is then washed with natural mountain spring water and sun dried on one of the washing station's 80 raised African-style drying beds. Even at this stage the coffee is hand sorted several times as a measure of quality assurance, and when it finally reaches 12% moisture content it is bagged and stored in the warehouse on the property.

Generally in Rwanda many property smallholders engage in subsistence farming. They grow an assortment of vegetables and fruit for their own consumption, and grow some cash crops, including coffee, to earn money. The actual quantity on some of these farms can be a little as a few trees (but of course some are larger). Much of the coffee makes its way to the washing station on foot, or more recently, on specially designed bicycles.

Cup Characteristics: Flavors of peach, red apple, honey, grape and vanilla, with aromas of coffee blossom and a rum-like sweetness. The acidity is citric and delicate, with a champagne effervescence. A smooth and creamy texture with a well structured cup.

Roasting Notes:We prefer to stop this coffee before the outset of second crack, in order to preserve citrus notes and brightness. To roast it too dark would mean that many of its subtleties would be lost, but be sure to have a first crack plus at least a full minute of development time and possibly first sounds of second crack. 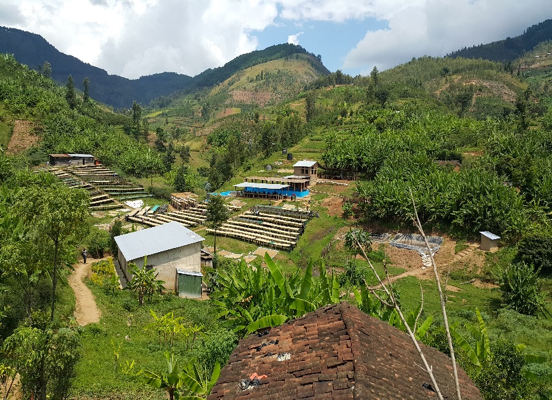 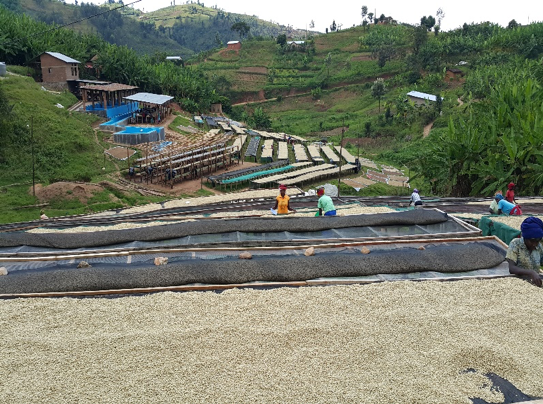 Grades: Superior grades are A1, A2, A3 based on bean density.

Farms: many thousands of small farms (under one acre).

Rwanda is a relative newcomer to specialty grade Arabica coffee production though coffee has played a major role in the economy of the country with coffee accounting for nearly 65% of export revenues. The country's bloody, genocidal civil war wrought economic and human devastation from 1990 until 2003, when international assistance and political elections brought some degree of stability to the country. Investment in the country's economy and crop production have aided in this tenuous stability.